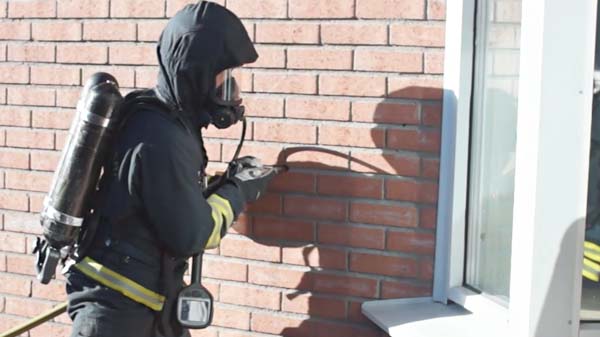 Firefighters occasionally deal with fires in compartments where it is too dangerous to enter. There may be pressurized containers, flammable liquids or gases, acids, radioactive materials or other dangerous goods. In some cases, the safest practice is to simply let the building burn down and protect exposures. However, in other cases, that may not be an option; therefore, a safe way to handle the situation is required.

Fognails provide a solution to suppress a fire inside a compartment without immediately assigning firefighters inside. By cooling the smoke through the floor, walls or ceiling, Fognails can limit fire spread and conceivably prevent further heating of dangerous materials such as pressurized containers. The Fognails can be put in place and then remotely controlled to minimize the firefighters time and exposure to potentially dangerous locations. If the smoke is cooled and rendered incombustible, firefighters can then proceed to ventilate the compartment. The ventilation may increase visibility and provide an opportunity to better assess the situation inside. When the compartment is deemed safe, the firefighters can then enter for final extinguishment and overhaul.

A fire may either start in or spread inside structural components like walls, floors, ceilings, knee walls and other small spaces. These fires are almost always ventilation controlled and only burn in proportion to the oxygen available. The openings firefighters make when trying to cool hot fuel surfaces provide oxygen to the fire unless all the hot surfaces are doused with water through the opening. However, the opening will also create flowpaths allowing the fire to travel to other places through convective heat. The third problem is that the opening will prevent steam from filling the space to further suppress the fire. 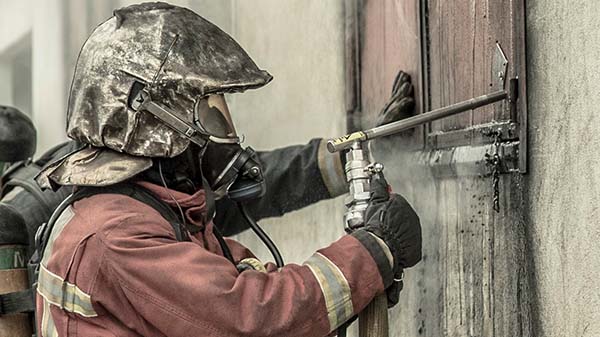 Fires in underground or other hard to reach compartments often require firefighters to work against flowpaths and with limited ventilation. In these situations an interior attack may be both slow and potentially dangerous.

Cooling the fire from the exterior, either through a wall, ceiling or floor, will reduce the risk of smoke igniting. After the fuel surfaces and smoke has been cooled, ventilation may be performed if it is practical. If it is not possible to ventilate, the interior attack may be performed in a cooler and less dangerous environment. 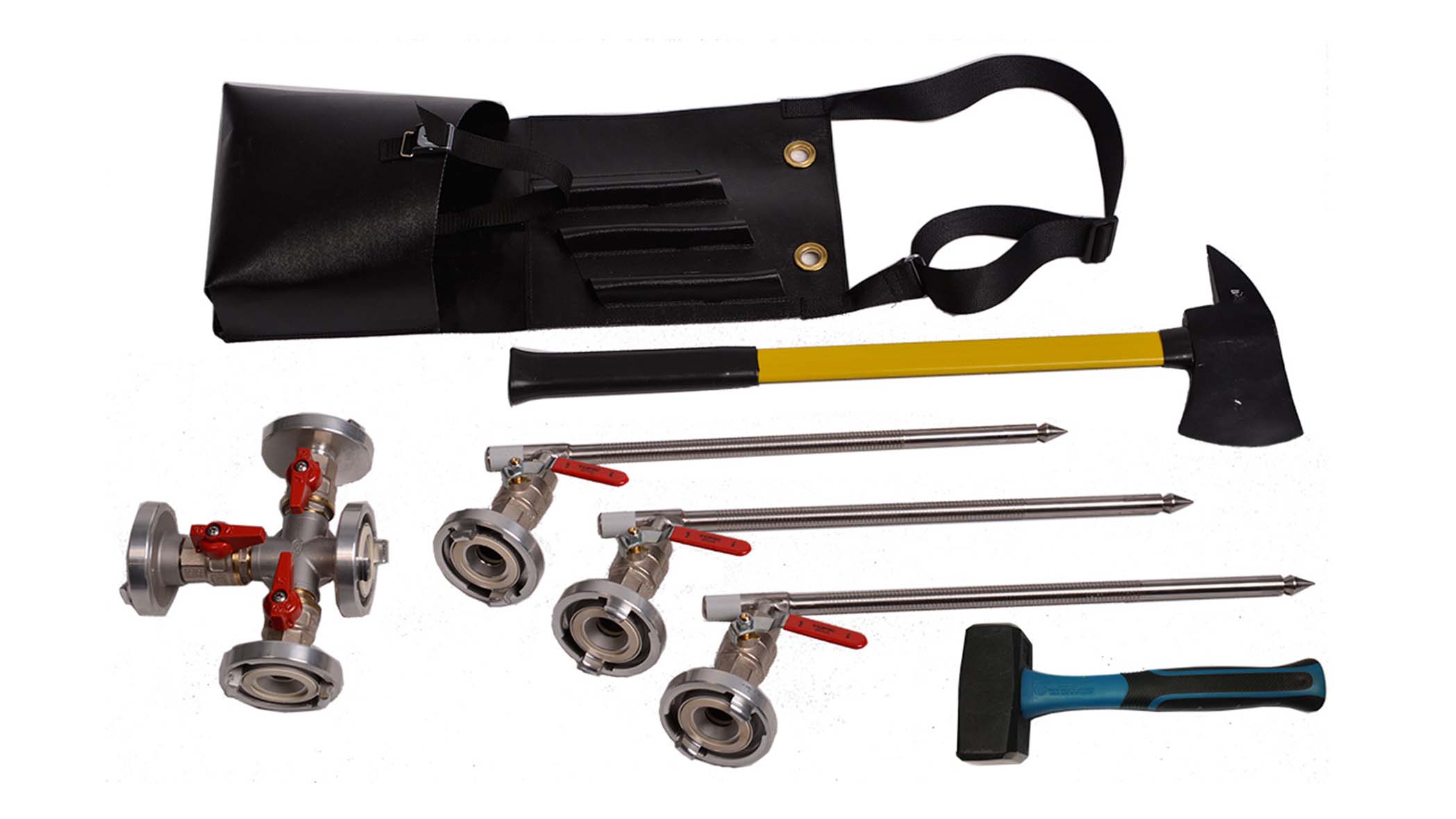 Fire aboard a ship presents several unique challenges and considerations. First and foremost, a ship fire can be exceptionally dangerous as it can be problematic to evacuate those who are in danger. Secondly, the fire may not only damage the ship creating a precarious situation for all aboard but may also consume valuable cargo resulting in a significant financial loss.

Ship firefighting is typically dangerous and complex due several inherent factors. The intricate vertical and horizontal design of the compartments, the cargo stored may be unknown or known to be hazardous combined with the lack of initial resources further intensifies the typical risks of firefighting.

Fognails provide a solution by creating a flexible sprinkler system to use in compartments and containers. By cooling the smoke and the materials inside the compartment the fire can be suppressed, without placing firefighters inside. A fire may be attacked through a wall, floor or ceiling depending on what is the most effective and safe solution for that incident. Either the fire can be suppressed and contained until special firefighting crews arrive to extinguish the fire, or if it is deemed safe, the firefighters may open the compartment and ventilate before mounting an interior attack and extinguishing the fire. 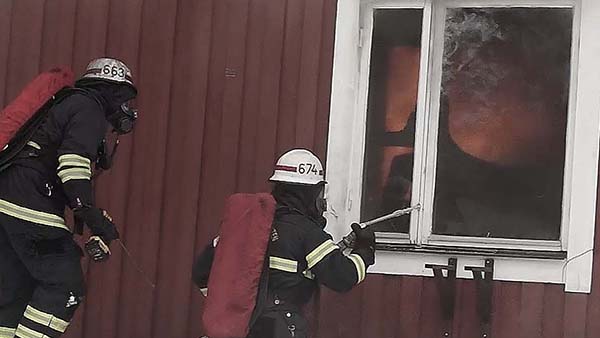 Most fires fought by firefighters have various components of the room on fire; property is being lost and people may be in danger. An interior attack will generally resolve the incident safely and effectively. However, in some cases, mounting an interior attack is too dangerous or will be too slow to achieve an effective result.

In a room and contents only fire where there is no possible rescue, Fognails provide a solution to safely cool a compartment and enable firefighters to prioritize property conservation with minimal water damage. In addition, by cooling the smoke from the exterior, Fognails may provide a safer environment in which to complete the interior operations of ventilation and final extinguishment.

Furthermore, in some fires, the use of Fognails may also enable firefighters to achieve the highest rescue potential. By providing the fastest way to cool smoke inside the compartment, the rapid cooling through the use of fognails allows quicker ventilation which in turn permits a faster search with better visibility in lower concentrations of poisonous gases. Thus ultimately, in some cases, achieving the highest potential for rescue. 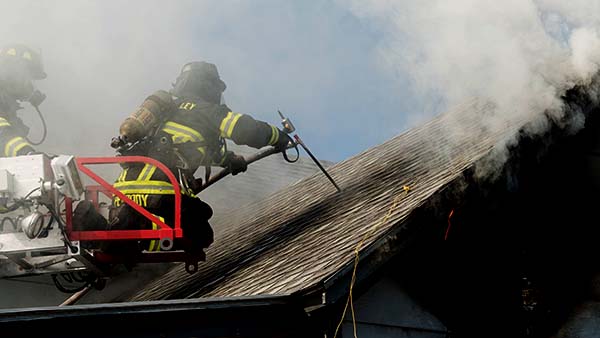 Attic fires are typically ventilation controlled fires with fuel surfaces that are difficult to reach. Without proper smoke and surface cooling prior to ventilation, the fire may grow substantially and possibly result in a total loss. The fuel surfaces must be cooled to stop the fire; however, both existing and created access openings may not provide the necessary line of sight access for effective water application to those surfaces.

Fognails may provide the required access needed. Not only to begin cooling the smoke and limiting the fire spread early in the incident, but also allowing additional time for more resources to arrive. After the smoke is cooled and the fire is brought under control, the Fognails can then be moved to other positions. New positions may provide the new stream angles needed to further cool the surfaces inside the attic and to stop pyrolysis. The end result is minimal water damage to the home due to the low flow and small droplets of the Fognails.